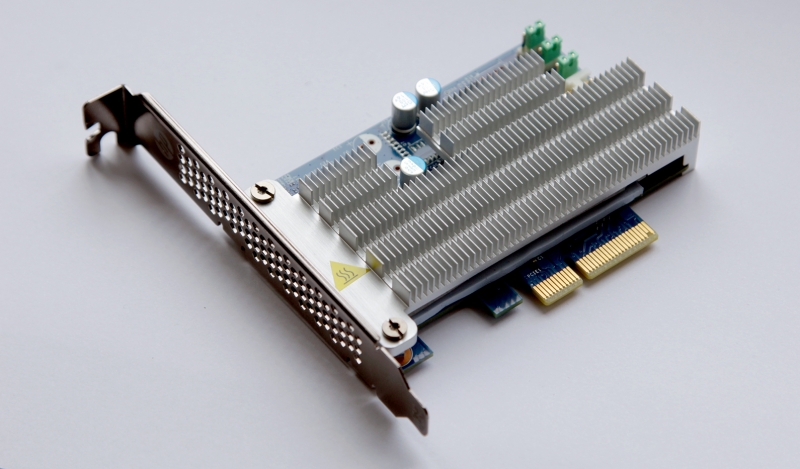 Technically, the Z Turbo is an NVMe drive - a new class of storage device, which is essentially an SSD. Like most SSDs it’s non-volatile, so it retains data when the power is removed. But whereas other SSDs connect via SATA, NVMe SSDs stand out for connecting via PCIe instead.

Tim explains that SATA comes from a long line of hard drive interfaces, so the way it’s designed it expects to interact with a hard drive. That means it takes up a top down approach, reading one bit of data at a time.

Hard drives with moving parts are subject to a “seek time”. A bit like a record player, the needle moves to the right circle then waits for the disk to spin round to the right point. SATA therefore anticipates that there will be a seek time and lets you queue instructions to help the hard drive prioritise.

In SSDs there are no moving parts, so the seek time is fixed and constant, regardless of where on the disk you’re reading. Also unlike hard drives, SSDs are composed of several chips that can be accessed simultaneously.

But SATA still treats SSDs like hard drives, so it accesses one piece of data at a time, and it’s still waiting on a long seek time. That means that, if the main CPU is working at 1 GHz (or 1 billion clock cycles per second, or 1 clock cycle per nanosecond), but the seek time allowance is 3 or 4 milliseconds - then the CPU is wasting a lot of instructions and time.

So SATA has become a bottleneck for SSD speed. There’s no current plan Tim knows of to release a faster version of SATA because hard drive speed hasn’t changed much - and it’s primarily a hard drive interface. The very fastest hard drive right now can manage 200MB/s, which is not testing the limits of SATA.

Left: hard drives look a bit like record players (the SATA connection is visible at the top); Right: an SSD with twice the volume of storage, designed to take up the same space

What’s better about a PCIe connection?

PCIe is the interface for things like graphics cards and remote storage to connect to the motherboard. It’s a parallel system with lanes, each of which is a separate communication channel. So the more lanes a motherboard has, the more you you can connect to it. A normal desktop computer will have 16 PCIe lanes; current Xeon V4 workstation chips have 40 lanes; and future V5 will have 48 or so.

With NVMe, the PCIe interface lets the operating system pick up lots of data simultaneously - so you don’t need a queue. Currently, it’s possible to have up to 65,000 data requests in flight simultaneously. With SATA by contrast, that figure is 32.

So because of the different interface, a SATA SSD runs at a speed of 600MB/s, while an NVMe SSD reaches 20GB/s.

Are there any limitations on NVMe technology at the moment?

It is early days for NVMe. Whereas SATA SSDs haven’t improved much since 2012 (being limited by their interface), the next few generations of NVMe do stand to get faster.

However, currently the largest NVMe SSDs are 512GB (the Z Turbo Quad Pro has 4 drives on each card, which add up to 2TB os space). But SATA SSDs can be up to 2TB, and hard drives can be as big as 8TB.

There also isn’t yet an NVMe RAID controller. You can RAID them together with software, but that takes a performance hit. The benefits of RAID are that it increases redundancy as well as performance, so a controller will be a useful development. So, the Z Turbo Quad Pro shows up as 4 drives on a system.

According to Tim, in VFX an ideal arrangement would involve a combination of small, fast (expensive) SSDs and big, not very fast hard drives.

And in other good news, HP have announced that they’ve fixed their prices until at least until the end of July, in spite of changes to the USD exchange rate. So if you’re interested in talking about your storage or HP workstation options, give Dom Minall a call.

The Z Turbo Gen 1, which from this angle physically resembles the Gen 2 except without the heat sink; you can see the PCIe connection and the storage, arranged similarly to the SSD above. The rest of the board converts the data between the storage and the PCIe interface.