Bjork has always been one for pushing artistic boundaries, embracing new technologies as they come to the fore. 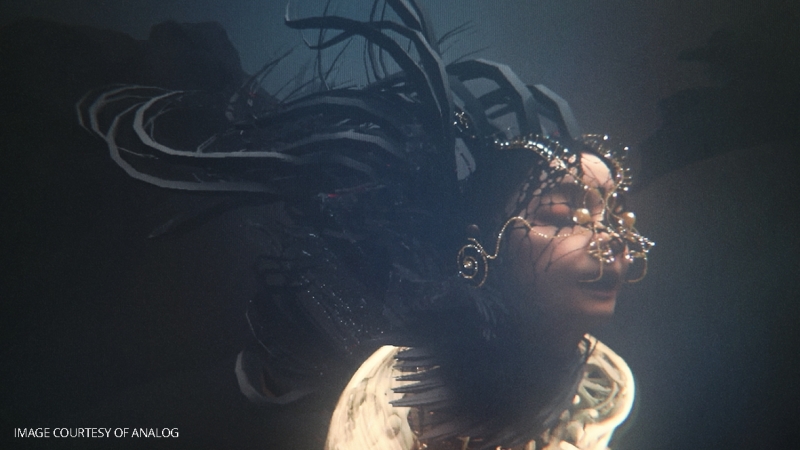 VR has been the topic du jour for quite some time now and Bjork’s latest album, Vulnicura, is the latest to make use of the experimental medium. And with the help of the guys at Analog, a truly immersive experience has been brought to life.

I visited Analog yesterday to try out Bjork’s NotGet real-time VR. It certainly made an impression, with me leaving a little… uneasy. Not because the work is bad, precisely the opposite in fact. It’s so real, so fantastical, that it creates a strange sensation in the viewer. Analog have made this 90+ fps drama in such a stunning way that it completely draws you in.

And it’s their first commercial VR project on the Vive. Which in itself is something of a marvel. But to have created, from scratch, a six minute long live show is simply incredible.

Working with longtime Björk collaborators Warren du Preez and Nick Thornton Jones, Analog’s Nick Chandler and Arvid Nikalsson spent some considerable effort on this harsh but fragile-looking world. A true echo of the spirit of Scandinavia.

Vulnicura’s concept is very personal for Bjork - revealing parts of her private life in heartfelt detail (including how she coped with the collapse of a relationship). This raw chronicle of soul is something for which you can rely on the Icelandic artist. With experiential technologies like VR becoming more readily available there now exists the chance to almost experience the inner workings of her mind.

You get the feeling that this motion-captured performance (grabbed at The Imaginarium) inserted carefully into an ominous, cinematic world really is something of a trip.

Using software that includes Maya, 3ds Max, ZBrush, V-Ray, and Houdini - and relying on Unity for the real-time morphing of Bjork, Analog have pulled out all the stops. Not only did they have to model two separate versions of the central avatar, but the landscape itself as well. And by moving the physics calculations over to the GPU Analog were also able to overcome the problems that 90fps puts on rendering in a typical VR pipeline.

The goal was to create something that would last and that feels more like cinema than a game - the normal curse of a VR experience. Virtual Reality is the perfect medium for a project like this; it gives you the chance to enter an utterly beautiful world rather than simply observe it. You become part of the surroundings.

In the end, what the creative team behind this extravagant immersion have done is to produce something that gives you a sense of terrifying realism, depth, and the most uncomfortable aspects of the soul of another living person. And it’s bewitching in its execution.

Check out the preview of NotGet below, or find out more on Analog’s website.